The Bearing Market will reach $ 96 billion turnover by 2016

Global demand for bearings  will grow by 7.8% per year and will reach $ 96 billion in 2016, as analysts say at the famous American consultancy Freedonia Group.  According to them, the sales of non-embedded (single), ball and roller bearings have three-quarters of total sales or more than $ 71 billion in the same time. Revenue from the sale of bearings will increase to $ 12 billion by 2016, the aggregate demand for built-in bearings,  the individual components and the combined bearings at $ 13 billion . in mature markets (such as Western Europe, the USA and Japan), the increase in sales will depend on reducing vehicle production and increased investment in fixed assets. 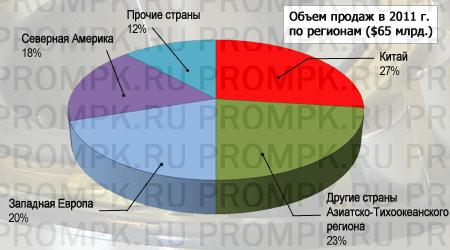 World bearing market, according to analysts, may grow from $ 65 billion in 2011 to $ 96 billion in 2016 sales in China will continue to hold the largest share

In countries where the bearing market is still developing, sales will rise to a rapid increase in the production of durable goods produced by the manufacturing industry, and the opportunities the average consumer to purchase equipment and vehicles, thereby increasing the demand for bearings by manufacturers and aftermarket.

The greatest growth will be in the Asia-Pacific region, in the period between 2011 and 2016. market will rise by an average of 10% per year and will reach $ 54 billion. That will be more than half of the global total demand. China needs to grow faster than other countries in the region: Sales increase by 13% per year by expanding automotive industry and construction machinery, coupled with a strong after-sales service of industrial equipment and vehicles. In 2016, sales in China amounted to one third of the world total, and in 2021 will exceed the sales in North America and Western Europe combined.

Demand for bearings in developed markets, including such large as Japan, Western Europe and the U.S., will grow faster than in the period 2006 -2011 years. In most of these countries, manufacturing, especially automotive, fell sharply in 2007-2009. Since 2009, it has become stabilized, and in 2011 it went up. Industrial production continues to recover, and the income from the sale of bearings will be much higher than now. The growing demand for industrial equipment and a variety of durable goods will contribute to rapid acceleration of sales of bearings by the original equipment manufacturers operating in Japan, the U.S. and Western Europe.