According to the Russian media, referring to representatives of the State Duma, in the next three months, an agreement to join the World Trade Organization (WTO) may be approved (by July), and Russia may become a member of this organization. This is a major concern of representatives of Russian bearing industry. In their view, the WTO has significant risks for companies and can simply destroy the bearing industry, in particular the lack of:

– Developed an institutional environment that would attract the foreign investment. 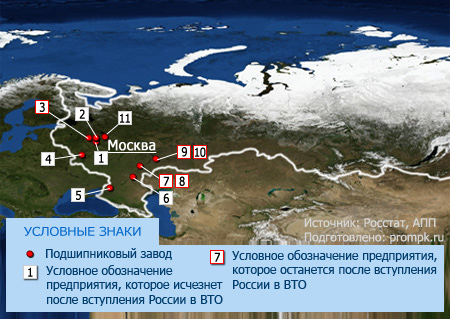 Most bearing plants may disappear after Russia’s WTO accession

The main producers of bearings in Russia

According to the experts of the Russian Association of bearings, some industries such as Defense and the Railways will not get affected by the WTO because of the strategic and economic reasons. It might be therefore that the following 5 bearing factories will survive the join of Russia into the World Trade Organization:

1) GFR Tver – Works with the international company SKF (Sweden) on production of railway axle bearings in the city of Tver;

4) Saratov Bearing Plant – manufacture of multi-purpose and special bearings in the city of Saratov, owned by the “European Bearing Corporation” (Russia);

However, no one in the Russian bearing industry can make an accurate prognosis to develop the right plan for future actions, as the documents of the WTO has only recently been declassified and made ??available to a wide range of experts.