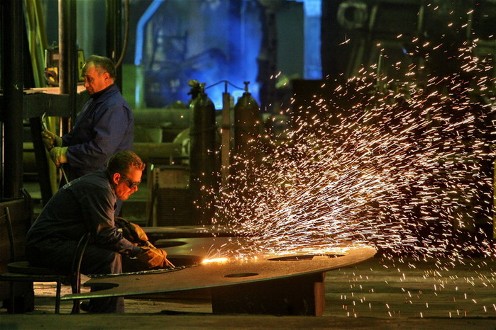 The agreement which was signed by the country’s Trade and Industry Minister, Dr. Richard K. Konteh on behalf of the Government of Sierra Leone in Boston, Massachusetts, USA has received nods from critics as the agreement makes Sierra Leone the first West African nation to embark on such capital intensive program.

The $180 million deal will not only lessen unemployment rate, but also reduce poverty.

Konteh revealed that government and the investors have already identified the portion of land that will be suitable for the project, and hopefully, work will start after the completion of the necessary due process.

The Steel Manufacturing and Semi–captive power plant will be established in the Northern Port – Loko district.

Speaking on the investment deal, FIRST STEP President and Chief Executive Officer Richard Schroeder, said “The Company will manufacture steel reinforcing bars (re-bar) that are essential to infrastructure development – buildings, roads, bridges etc. Re – bar, used in reinforcing concrete, which forms the basis of most infrastructure and construction projects. It will also generate 30MW of power, using three sources – 16MW from waste heat, 4MW from waste char and 10MW of thermal power.”

He revealed that the concept was first discussed around conference tables in World Hope International (WHI).

Today, he said, “We have a unique and expertly crafted agreement with the government of Sierra Leone that creates a legal framework under which we have established the FIRST STEP Special Economic Zone (SEZ).”

Under the FIRST STEP agreement with the government of Sierra Leone, any dividends that WHI earns on its equity holdings in FIRST STEP must be reinvested into humanitarian efforts in Sierra Leone.

The initiative is part of the President Ernest Bai Koroma led administration strategy under the “the Agenda for Change policy” to liberalise the Sierra Leone economy and establish an efficient and effective business environment.