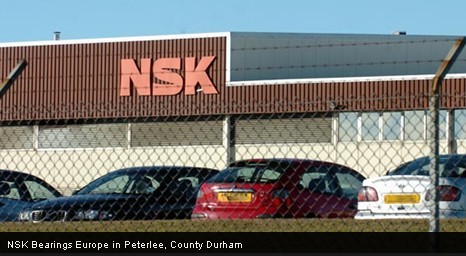 A CAR parts factory in County Durham is to benefit from a £27m expansion which would see it increase production by around a third.

NSK Bearings Europe is stepping up the output of its Peterlee bearings factory as the motor industry continues to recover.

The move will see four new production lines opened at the plant, which has more than 430 staff, and it will lead the firm to create another 45 jobs. There will also be more warehousing and an on-site training centre.

It is the biggest expansion of the plant since it was opened in 1976 – the first major Japanese investment in the North East.

Human resource manager Steve Metcalfe said: “This will allow to substantially increase production, by around a third, and increase our range of customers. It is very good news.”

Its customer base will grow to include firms including Daimler, Renault and Nissan, the biggest Japanese investor in the North East with a Sunderland factory which now employs more than 6,000 people.

The plant’s Japanese owner has invested £23.5m into the expansion and the other £3.5m is coming from a Regional Growth Fund grant.

Plant director Keith Brain welcomed the news of the grant from the Department of Business, Innovation and Skills. “We are delighted that our investment proposals have been supported by the Government, which has secured this growth for the North East region. This is excellent news to everyone that works at Peterlee.”