Bearings play an important role in the industrial and process equipment, and is a crucial component of the infrastructure directly determine the performance of the basic equipment and a range of products, their quality and reliability. After several years of development, China’s bearing industry has gained considerable scale and was ranked third in the world with a turnover of more than $ 20 billion in spite of the scale of development, China’s bearing industry is mainly focused on the production of low-current bearings, at the same time, behind the developed countries in the manufacture of high accuracy classes bearings. 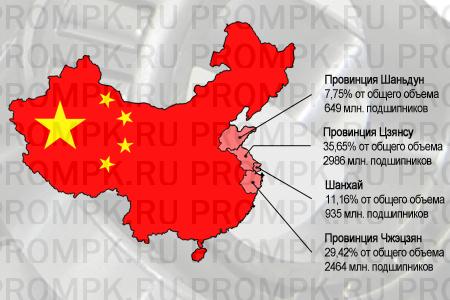 Main bearing production in China is concentrated in the provinces of Jiangsu, Zhejiang, Shandong and Shanghai. According to the report CBIA in first half of 2012 in these regions had a total of almost 84% of the total production of bearings and more than 7 million units. The leader is the province of Jiangsu, the enterprises which had 35.65% of the total production, or 2986 million bearings

According to the published CBIA (China Bearing Industry Association) review of the market, in the first half of 2012, domestic manufacturers have released 8,375 million bearings, which is 7.21% more than in the same period of 2011. In June, production reached 178 million bearings, an increase of 9.35%. The bulk production (about 84%) in the first half of 2012 came to enterprises located in the four eastern regions: Jiangsu, Zhejiang, Shandong and Shanghai.