NTN counterfeit bearings intercepted in the Chinese port of Jianying

The Nanjing District Customs (Jiangsu, China), intercepted together with the Customs of the port Jianying  a party of counterfeit NTN Bearings on March 15 2012. After inspection of a foreign vessels from Hong Kong, which was loaded with spare parts for the repair of ships, 33 sets of cylindrical roller bearings with NTN brand with a total value of $ 13,860 were found. 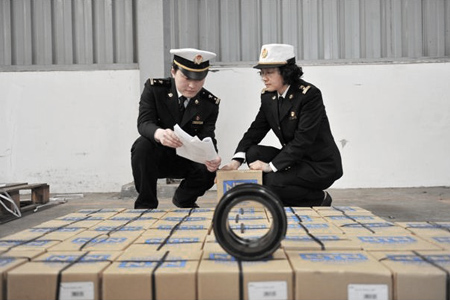 Customs officers suspected that the bearings were counterfeit and violated the intellectual property of others. The answer to the request made to the office of the company NTN Corporation (owner of the trademark NTN), confirmed the fears of the Customs. On the base of the received documents from the representatives of NTN Corporation, the goods have been detained and taken under investigation on 27 March 2012.

For customs of Jianying this is the first investigation related to a violation of intellectual property and unlawful use of a registered trade mark. Currently, this case is the subject of attention from the regional customs service, which tries to bring order to the shipping routes of the main rivers in China.