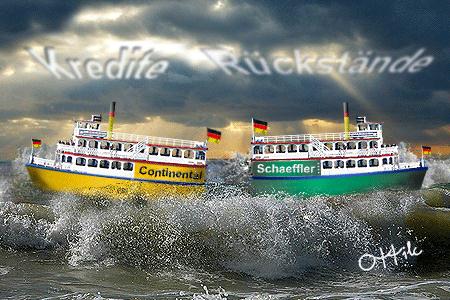 Schaeffler AG, manufacturer of bearings and auto parts from Germany, this week said it sold 10.4 percent of Continental AG shares for $ 1.6 billion to reduce debt after a failed capture tire manufacturer. Private Banks MM Warburg and Bankhaus Metzler got rid of the 20.8 million shares owned by Continental Schaeffler, which they kept in their own as collateral. The securities were sold at 77.50 euros per share a large range of international investors. Cash from the sale of shares will reduce Continental Schaeffler debt by 31% to 3.5 billion euros.

Businesses Schaeffler and Continental will diverge over time in different directions?

Private company Schaeffler AG, owned by a German family Scheffler, gained control of Continental AG – the second largest European producer of auto parts and tires – in 2008 at the height of the global financial crisis. Schaeffler tried to conduct a “reverse takeover”, but markets have collapsed, and remained a family business with more than 90 percent of shares of Continental and more debt ($ 10 billion), taken for this large-scale transactions. Not to be torn creditors, Schaeffler was forced to begin debt restructuring, an important element of which was the proceeds of the gradual sale of shares in Continental.

Currently Schaeffler continues to be the largest shareholder of Continental AG to 49.9%. And say Maria and Georg Elibazet Scheffler, co-founders Schaeffler AG, they will continue to participate in the business of Continental, which will have a “long-term and strategic in nature.”

After obtaining control at Continental Scheffler family tried to unite the company, but was faced with harsh criticism and resistance from management and the minority shareholders of the tire manufacturer, and lenders that are not without reason the union of all fatal. However, a number of collaborative projects aimed primarily at reducing costs and development of new products yet started. Thus, the joint procurement of materials and equipment saved more than 350 million euros.

But analysts say, after the loss Schaeffler controlling interest, of any association is not out of the question. Business companies will remain independent and, most likely, although joint production projects, will only grow apart.

In the financial world, the Schaeffler is known, above all, large debts to banks that emerged after the purchase in 2008 of a majority stake in Continental AG.