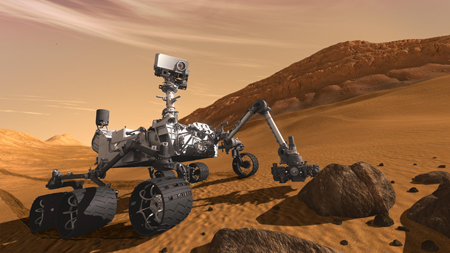 The size of a small car and weighing just under 900kg, The Mars Science Laboratory rover, Curiosity, is one of the most expensive and technologically challenging planetary science missions ever attempted. Over the course of a two-year mission, the nuclear-powered rover will explore Gale Crater and attempt to climb a three-mile high central mountain.

The environment on Mars is extremely hash and therefore places huge demands on the bearings. Temperatures in the Gale Crater range from -90 to 0 deg C. Hurricanes can also sweep across the surface with top speed of 140km per hour, whirling around huge amounts of sand. Under these conditions, it is critical that the bearings do not fail or present any problems for the NASA control center back on Earth. In addition, maintenance is definitely not available.

Curiosity, which landed on Mars on 6th august 2012, is a six-wheel research rover that uses a suite of sophisticated instruments to help scientists understand the broad history of Mars and whether or not the planet ever hosted a habitable environment. The cost of Curiosity is approximately $2.5bn.

The turret at the end of Curiosity’s robotic arm holds two scientific instruments and three other devices. The arm places and holds turret-mounted tools on rock and soil targets and manipulates the sample-processing mechanisms on the turret. It is strong enough to hold the 33kg turret at full extension of the arm. With the arm extended straight forward, the center of the turret is 1.9m from the front of the rover body. The diameter of the turret, including the tools mounted on it, is almost 60cm.

Barden bearings are located in many positions aboard Curiosity – several of which are positioned in the turret, on the drill bit assembly and in the vibration motor, an integral part of the CHIMRA tool (Collection and Handling for In-situ Martian Rock Analysis).

For the customer, the most important considerations when selecting a supplier of the bearings were design consideration, lowest possible mass, low friction and rapid delivery. The bearings on the drill bit assembly are angular contact (15 degree contact angle) bearings manufactured to ABEC 7 standards, with SAE 52100 steel rings and balls and Phenolic ball retainers.

The bearings on the vibration motor were also manufactured to ABEC 7 standards, with 440C rings, Phenolic ball retainers and were lightly pre-loaded.

This is the fourth time that Barden bearings have landed on Mars. Baden was previously onboard rovers Spirit and Opportunity, and more recently was an integral part of the Phoenix Lander.