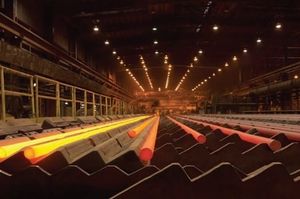 Executives told investors during an earnings conference call that despite fourth-quarter steel capacity utilization rates dropping below 50 percent, Timken’s ongoing equipment upgrades and installations are aimed at developing new, larger-diameter products for users outside the automotive industry, on which most competitors are now focusing.

Steel segment sales are expected to fall 7 to 12 percent this year, “driven by lower end-market demand in the oil and gas and industrial sectors,” chief financial officer Glenn Eisenberg said during the conference call, but a slow start will be balanced by improving conditions throughout the year.

“We finished the fourth quarter at under 50 percent utilization,” aerospace and steel group president Rich Kyle said, but “we expect that our backlog and order input for the first quarter to be up toward 60 percent.”

The capital projects Timken will start up “are not really around capacity,” president and chief executive officer Jim Griffith said. “Of the two big projects, one is around cost reduction and the other is around product expansion, capabilities, entering new markets and furthering our product line.”

The biggest part of the capacity expansion—-which is focused on 6- to 16-inch-diameter bar products—-is scheduled to come online in mid-2014, Griffith said. “Most of the capacity (that our peers are bringing on) focuses more on smaller products (6- to 8-inch diameters and below) and automotive markets, whereas our (range) is more focused on industrial (and) oil and gas markets.”

Griffith estimated that domestic SBQ capacity will expand by 15 percent in 2013, but “above about 9 inches in diameter there is nobody in North America who can produce it, so that’s a unique space for Timken.”