U.S. import-export of bearings increased by 2%

The U.S. Bearing market is one of the largest in the world and; according to various estimates more than $ 8 billion in spite of the fact that the country has vast number of bearing plants, the need for rolling bearings is so great that some of them are imported from other countries. 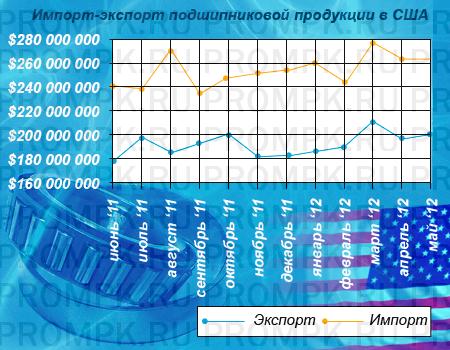 The deficit in the U.S. trade balance by rolling bearings due not only to a large consumption of this production enterprises of the country, but also a lower price on a number of imported bearings

According to the Census Bureau, the main statistical agencies of the U.S., in June it was exported bearings for a total of $ 204,127,344 and imported for $ 269,405,138, an average of 2% more than in May. The main importers in June, as well as in May are Japan, China, Germany, Canada and Mexico. Main sources of imports in May were Canada, Mexico, China, France, Germany, and in June, there have been changes – Germany gave his position to Australia.